I'll admit, most of my life I've been somewhat of an entertainment junkie. And by somewhat, I mean........totally.

But in recent years, my priorities have shifted quite a bit and I can't even remember the last year I watched the Emmy's. I mean, who has time to WATCH television let alone watch a show that celebrates the accomplishments of said media? Not me.

But not this year. Oh no. I was GLUED.

How many years in the past have we all watched the "documentary of the moment" walk on stage and scoop up their prizes? In years past we've seen made for TV movies ranging from war to depression to religion to politics to disease and everything in between. And it's been great. I'm really happy for all of the winners (hits FF button on the DVR remote).

And we won. Big. (May I add, as I predicted in my very own blog post) 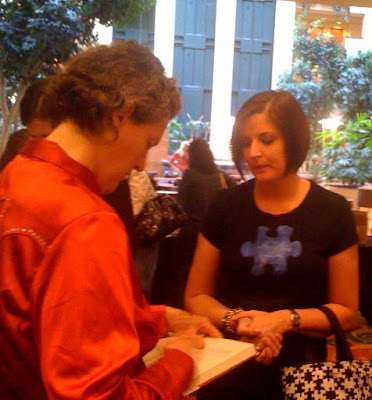 So if I don't know these people, why do I care?

And this movie, Temple Grandin - - brought autism to everyone's living room. It's out on DVD now. If you still don't know what autism is, spend the $15 and watch this movie. You'll know. This movie takes you literally inside the mind of an autistic person. And what an amazing mind it is.

The movie won 7 of the 15 Emmy's it was nominated for:
David Straithairn: Best Supporting Actor
Julia Ormond: Best Supporting Actor (she portrayed Temple's mom to PERFECTION)
Claire Danes: Best Actress (you may have heard, she actually played Temple, BRILLIANTLY)
Mick Jackson: Best Director (GENIUS)
Oustanding music composition - did you know the volume of the music was adjusted up and down to try to mimic the autistic experience?
Outstanding camera editing - I'm thinking about that ceiling fan friends. The one that still haunts me.
and of course: Outstanding made for TV movie

Sooooooooooo the Emmy's kind of turned into, "The Temple Grandin show." Because by GOLLY every time they said her name, she stood up and waved. GO GIRL!

Every award they handed out, I clapped and I cried.

I love what she says in this clip. I LOVE IT. "I absolutely knew that a mom would do it right."

Wait, I thought autistic people were socially awkward and never knew the right thing to say?

I wonder if Temple herself realizes what an inspiration she is. To all of us. I wonder if she realizes that getting up on that stage - - PERIOD is an inspiration but then the hug........ oh the hug. Those of you on this journey with me -- you know. Enough said. If Temple can get there....so can we. So can your child.

Congratulations and thanks to everyone who had anything to do with getting this movie made. Thank you for using your power and your celebrity to bring autism to the forefront. Thank you for doing it right. Thank you for not only raising awareness, but taking it a step further and educating.

Thank you Temple Grandin. For opening up your life to us. For sharing your story. For being an inspiration. For continuing the fight. For being who you are. For showing us the way. For blazing the trail. Most people who DON'T have autism have the capability to do that. How brave you are Ms. Grandin.

I hadn't heard about this movie before you mentioned it. I've put it on my NetFlix queue in the number 1 spot. It says it should be available around 9/14. It sounds amazing!

It will change your life Karla, no matter how much you think you know about autism...you don't! =) Enjoy it!

adding it to my queue, can't wait for it to get here....why is netflix so slow getting the movies??

It was indeed a fabulous night at the EMMY's, we were waiting in the Surgical lounge, watching, each time a new category came up, i would try really hard to hold back the tears. But never seem to be successful. What a special Night it was for so many people. Thanks for sharing your journey with us all April & family!!