I know, I know, I know. The topic this month is, "believe." I get it. I've been talking about "believing in yourself," but yanno what? Sometimes it's kinda hard. I get that. On a night like tonight, I get that more than anyone.
Here's the thing. It's sort of a dirty little secret. But I'm about to let the cat out of the bag.
A year ago, I wrote a book.
Yep, I, me, April Schmidt wrote a book.
Guess what it's about? Come on, guess........ it's going to be shocking.
A little boy with autism.
It's a children's book. A picture book, in fact. And here's the story of how it came to be.
About a year ago, Luke and I were having a really bad day. Sometimes we have those. Luke is REALLY into books and as we were laying in bed trying to wind down this bad day and put it behind us, I was really wishing I had a book. This book. A book that he could "read" and relate to. A book that he could look at the pictures and say, "Hey that's me! I am not alone!" So as I continued to lay with Luke and attempt not to fall apart so that I could escape his room only to go put Jared to bed with a brave face.... I started thinking about this book. And not to get all "Hi I'm Stephenie Meyer and Twilight came to me in a dream," or anything.... but all of a sudden, I could see the this book. The words.....just came. The pictures....just came. And there it was.... this book.
So I immediatley called my writer friend Myra and told her the story. She said, "Well how long will it take you to write?" To which I responded, "It's already written." I literally put my fingers on this very keyboard and the words virtually typed themselves. Then a few days later Jeff came home from wherever he was out of town and since my art skills are about as mad as.... well they aren't ~ Jeff feverishly got to work creating pictures to match my words. And he was awesome about it. He asked me a lot of questions and drew up a story board and drew and re-drew knowing all along that no matter what ever happened with this book his pictures would never been seen because, well..... he's better than I am but he's not quite that good. But he still gave it 110% for which I am thankful. (Woah, I need to catch my breath after that thing I will loosely call a sentence!)
I never set out to be a writer, an author. But... this story obviously needs to be told, right? So I actually started doing some research on how to get this book published. I even bought a few books on how to publish books which is kind of wacky but I went for it. So over the course of the last 12 months I submitted my book to a grand total of 3 publishers. 2 of which outright rejected it and 1 never responded at all. I'm ok with that. Then my life got sorta busy with a billion other things and I put this book on a shelf. And kept saying I'd get to it.

Well, I'm getting to it.

Before me sits an envelope and in the envelope is this book and I'm mailing it out to a publishing house tomorrow. This is a publisher that specializes in books about autism. But, so were 2 of the others. That's OK. Rejection is ok. I didn't set out to become an author so if this never happens I'll truly be ok with it.
And yet, in the last year I have told a very small small select few people about this book. Because even though, "I don't care what happens," I think in a way if nothing ever happens with this book I will sorta take it personally because the story belongs to Luke. And you can 'dis me all you want by saying you don't like my blog, but you can't 'dis Luke by saying you don't like this story.

His story.
So getting back to believing. Because I promised I would blog about that very word this month.
I need my dear readers to believe in me right now. And to believe in this book.
Which, by the way is called....
Sometimes I'm Like A Puzzle.

And in case any potential publishers visit my blog to see if anyone gives a rip about what I have to say, I shamelessly now ask you to tell a handful of people about my little blog and to become followers. It's imporant that publishers think I'm cool and have lots of followers! And believe me when I say, that yes, I would like this book to be published. But NOT because I want to be the next Stephenie Meyer or even the next Eric Carle. But because, I believe (dang! there's that word again and I didn't even try that time!) this story needs to be told. Because with the number of diagnosed cases of autism skyrocketing, society needs to gain an understanding of what autism means and fit it into their defintion ~ a new definition ~ of "normal."
So thanks for believing in me. And thanks for reading. And if you're reading and aren't a follower, please become one. Maybe someday I'll send you a copy of this book. 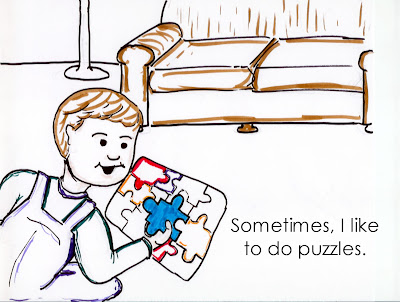 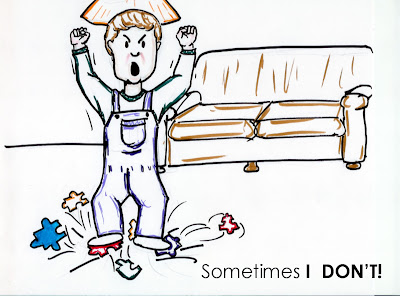 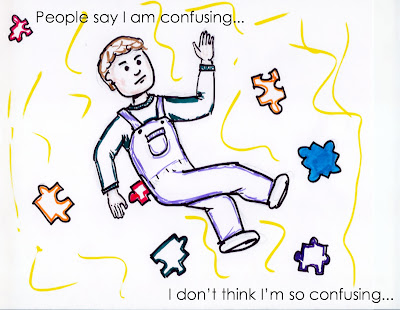 I, for one, would love this book! Books like this one would REALLY help in the classroom! :)

I too believe this will happen for you & Luke April!!! Great Job~~

Awwww shucks. Thanks y'all. Pretty soon I'll have the whole book uploaded so you can see it. Thanks for the support and spread the word! (Please!)

This Book NEEDS to happen. I Believe it will April.

Believe and Receive Baby is my mantra for 2010! I too am leary of the over use of believe...however what else do we have? Faith? Hope? Prayers? Blessings? It all comes down to this...we must believe!

Mrs Schmidt you are a very special woman with a heart of gold. Thank you for all you are and your committment to your beautiful children and Autism.

Keep believing and it will happen!! Hoping it happens sooner rather than later for you! Sounds like a great book and if it helps your son it could help others!

Good luck - I hope your book gets published right away - I would love to order it for the resource library at the Autism Center I work at.

As the mother of two children with Asperger's Syndrome, I definitely believe this is a book that needs to be published. Best of luck to you!!

What an awesome book and I think it would help so many people understand Autism.....I know it helped me know a little more about what children with autism go through (and their parents). I hope this dream comes true for you because you are an awesome mom and ALWAYS finding new ways to help Luke! Knock their socks off girl! =)

You are incredible! I say it often .....I don't now how you do it all and do it all so well? You are an incredible lady (& Mom), I am constantly in aw of you!

I once was given a great coffee mug that says "YOU GO GIRL"! That is what you make me want to say!

I think it's a wonderful idea to create a book for children with autism so they can see themselves in a story they can read!! You have my support!!! Tell Jeff nice illustrations!

So it took a sleepless night in North Carolina but I am here and love what you are doing and your writing style.