Believe in the moments...big and small

Wherever you think they come from.

However you think they come to be.

Just believe that they do, in fact happen.

And while we're on the topic, just what IS a miracle anyway?

Right now, people are talking about the miracle of the birth of Christ. OK that can be considered a miracle.

Sometimes I think it's a miracle that Luke can I can get through Kroger outburst free and I've only spent $20 extra to keep him happy and not $50 and I only forgot 2 things and not 10.

Sometimes I think it's a miracle that everyone in my house has clean underwear on any given day. And I'm not saying that to be funny. I'm saying it because it's true.

My point is, miracles do NOT need to be these "major events." They certainly can be, but don't have to be. Miracles are all around you, everywhere you look. Believe they can happen.

I've mentioned before that my older son Jared was born with an extremely serious heart condition, transposition of the great vessels. He should have died. 25 years ago, the surgery that Jared had didn't even exist. 25 years ago, he would have died. Period. They wouldn't have even bothered trying.

This was the time of my life when I started believing.

Believing in each other.

I never thought, ever thought that I would, or even COULD survive that time. It was so dark. So so dark. Our window of hope was so small. The mountain we had to climb was so very high. I was young. My marriage was new and my body was physically broken from giving birth. I remember starting the days after having Jared.... standing in the shower just sobbing quietly. And I'd stay in the shower for a really long time, hoping that if I stayed in long enough, by the time I got out my problems would be gone. They weren't. Sometimes you just have to put on a brave face and fake it 'til you make it. And that's just what I did. I realized then that my life was no longer all about me and that my number one job was to be strong for Jared and to get him through this obstacle. I had to push through. I believed in myself.

One of the somewhat ironic things, looking back, is that you show up at the hospital and are just given a surgeon. It's an emergency situation so there's not really time for second opinions or researching other options. I assure you I have done WAY more research to find a good hairdresser than I did to find the surgeon who would open up my 8 day old baby from top to bottom and operate on the most imporant organ of his body which happens to be the size of a walnut, backwards, and full of holes. Call it luck or call it a miracle. We got the best surgeon in the world. Dr. Edward Bove at the University of Michigan. We got the man who completed the entire surgery and for some unknown reason just didn't like the way it looked and started all over. And Jared has never, EVER had a problem since (knocking aggressivley on wood). I'm sticking with miracle on this one.

And then there's believing in each other. A situation like this one takes a village. This is not a journey that you go through alone. You almost want to, but you can't. Dr. Bove, I believe in you. Every single person from St. Mary's Hospital where Jared was born to Spectrum Hospital where he had his first surgery, to the helicopter pilot, and finally to the UofM hospital, I believe in you. Every.single.one.of.you. Jeff, I believe in you. Cuz I never, ever thought our marriage would survive such a challenge. Our family... I believe in you... because never ever before has a family rallied together to form such a united front. My aunt MaryAnn cooked for us and brought food to the hospital. Each and every one of you cried with us. Held our hands. Were just there. Gave us support in so many ways. People came out of the woodwork that were friends of our parents and families, people we didn't even know. Strangers to us sent us money so that we could afford to stay AT the hospital and be with Jared at all times. I know that helped speed his recovery, and ours, too. And mostly, my dear Jared ~ I believe in you. The moment you were born I knew you were a soul to be reckoned with. I was right.... nothing can stop you. NOTHING. You have NO IDEA how much I believe in you.

Believe in the moments. The big ones. The little ones.

Believe in each other.

Believe in miracles. They are everywhere.

"Don't believe in miracles - depend on them." Laurence J. Peter 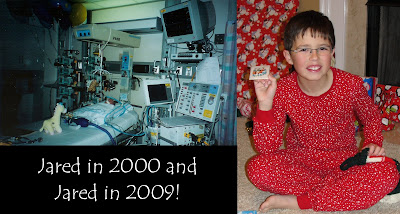 .... and yes, Jared still sleeps with that yellow giraffe, every single night!!!!

My first miracle was receiving your card so many years ago and getting you back in my life. You hold us all together. Love you - thank you!

April, this is beautiful!! As I am wiping the tears away reading this!! Miracle indeed!!

Thanks for sharing your thoughts....

What a wonderful and thought-provoking blog! We do forget to stop and see the tiny miracles all around us. I never knew this about sweet Jared and how rough his life started out.....what a miracle indeed! And wow, what a tear jerker this blog was, but VERY enjoyable and inspiring to read! Thanks for sharing!

April, I think you may have a second book on your hands with this story. Definitely brought tears to my eyes also, I had no idea. You guys have been through a lot which has obviously made your love deeper and your family stronger! I am just so happy that it has all worked out! You are an amazing, inspiring, brave mother and woman. Keep it up and thank you for sharing your stories. Let me know when your book gets published. I definitely want to buy a copy but you must sign it for us. Be proud and keep believing in YOURSELF...

April, thanks so much for sharing your story. This was a very touching piece and I'm crying now. I'm a new mom too and needed to read that right now. Thank you! You are an inspiration and so talented. I remember your SNL skits back in the day and you do have a gift!