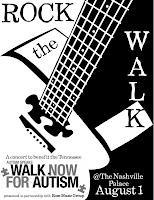 Well, in case you haven't figured it out, I do a lot of work with Autism Speaks and the TN Walk Now for Autism. I've mentioned before why I feel it's so important to raise awareness but... I'm going to say it again.

This week a group of high school kids asked Autism Speaks to send someone out to talk to them about autism. How cool, right? They wanted to learn more! And my "more," I mean, "at all." Of the 42 kids in that room with me, ONE of them even knew what autism was.

Newsflash: 1 in 150 kids are being diagnosed with autism in the United States. In the UK it's estimated that the numbers are more like 1 in 67. We need, *NEED* to educate the masses.

So I was thrilled to have the opportunity to teach these kids about autism and what it looks like and I encouraged them to go tell 10 people about what we talked about and make the information viral. I mean, Comic-Con and Twilight are trending topics on Twitter and yet autism is not? Really?

The reason I am attached to the walk is because, it's a day for all families to join together as one. When we can bring our kids and let them scream and throw tantrums and NO ONE CARES. No one even looks over at you, because their kid is doing the same thing! It's a day when we can just all be together and support each other and raise awareness and be PROUD of our autistic kids and proud of ourselves for surviving one day to the next. It's a good feeling.

There's also that other dirty little reason that no one wants to talk about...and that is the raising money piece of it. Yuck, my least favorite part. But one that has to be done. Even though Toni Braxton and Ernie Els donate their time to do PSA's for Autism Speaks, unfortuneley NBC and the like don't donate air time. Now, this is just one of the zillions of things that AS does, but I'm telling you, more people say to me, "I saw that commercial with Toni Braxton.." than you can imagine. And THAT is awareness. THAT is spreading the word.

Of course Autism Speaks is really more about science and research and figuring out solutions. They have made amazing strides and I'm lucky to say I live in Nashville because AS gives millions of dollars to the Vanderbilt Kennedy Center, which was recently named an ATN site(Autism Treatment Network) thanks largely in part to grants from Autism Speaks. It's nice to see the money come back to a local organization that helps many local families as well as performing large scale research programs that help thousands. It's all good stuff.

So having said alllllllllllllll of that......... this year, I decided that living in "Music City USA," we had to tie music into this somehow. So... together with Rose Music Group (a fabulous special needs music education provider) I'm hosting a benefit concert.

Because I don't have enough going on, right?

So here are the deets! ROCK THE WALK Saturday, August 1 at The Nashville Palace. Featuring Rissi Palmer, (that's her singing "No Air") The Rust, Ashley Ray, Bethany Anne, Britten (who recorded with my boyfriend John Legend!), Brinn Black, and Rick Seibold. And remember the total cutie from TLC's While You Were Out? Evan Farmer? He's hosting. Because he hearts Autism Speaks. And a very, very special performace by Katie Chance. Katie is 11 years old and has autism. She's going to get a post of her own because last time I saw her she brought me to tears. Watch this one, people, she's going to go far. 7:30pm. $30.

Why Rose Music Group? Because Tatia Rose is developing an autism music education DVD which she will then give to families FOR FREE. Wow. Music is an absolutely amazing and essential way for autistic children to express themselves. This is a wayyyyyyyy cool program!

Click here to make a donation to Autism Speaks and the TN Walk Now for Autism.
TOP

I'm so excited for this event. I really wish I could come but this is the one night this summer Clint has to work the GJ cruise and I go with him. But I think it's going to be a spectacular success and I'm going to link this post up on my blog to send more people your way.

Myra sent me :-) I don't live anywhere close enough to attend, but next time you need a donation of some kind of prize-age, let me know and I'll be happy to donate some books (signed, with stickers and other fun stuff).

I heart blog stalkers! And thank you all for visiting and commenting! =)

This is going to be an awesome event! I really wish I could go but work is getting in the way. Thanks for the cool and informative interview. I hope we get a lot of peeps out there with some serious cash money! :-)

Thank you all, thank you Myra (sorry about your broke!) Mrs. Jackson, Luke will be at CRES next year so you better contact me so we can talk! *wink!*

You're going to have to feed my Hot Tamale addiction while I'm trying to scrape up all this money!!!

This is very cool! Wish we could be there for the concert - but our weekends are getting packed as summer winds down:( Please let us know when the walk is.

Good luck with the concert. Knowing you I'm sure it'll be completely awesome. Ditto Leigh's comment about Myra reaching $100.

I wish I didn't live so stinkin' far and could come down. Myra, you are awesome for doing this, good luck! I'm sure it won't take long to reach $100.

Ok Im rounding up my peeps for the concert..great blog btw!Love the song!

Great Work you are doing April!!! I love the shirt you had made for Luke about stare alittle longer. So true of strangers. It makes me crazy how people stare at Alisa. Wish you much success on your concert!!! Great Article on the front page. You shoud be very proud of your hard work & accomplishment!!!

Continued success at reaching many people on awareness!!!

April - You.Are.Amazing! Best wishes on this event. Sounds like a blast!! Is there a Rock the Walk - Motown in the future? Let me know! I'll be there!! :)

When I worked as an aide at a local public school, I was surprised by how many children are diagnosed in the autism spectrum. Most of us who work at schools are not trained in how to deal with autism at all and because of privacy laws, we often don't know if a child has any sort of diagnosis. Of course, you hear things through the grapevine, but it seems to me there should be more training available for people who work with children on a daily basis. I need to see if a group like yours exists in my area.